Light and agile, Dirt Bikes take the bumps and jumps with ease, can be thrown around corners and scramble up the steepest of hills - but they can also be an easy target for the opposition.

Bikes (referred to as Dirt Bikes in MotorStorm: Apocalypse) are one of the fastest-accelerating vehicle classes in the MotorStorm series, and have good grip and maneuverability in nearly all conditions.

At full boosting speed, it can bounce around on the track, making it difficult to control and this can potentially lead to a wreck. Due to their size, they have low strength and can be crushed or knocked off course by any vehicle bigger than an ATV, which rams it. To win races with a Bike, you will have to stay out of the other racers' way and take routes which the bigger vehicles do not normally take. You will also have to avoid deep water and thick undergrowth as both will slow you down, and the undergrowth may even knock you off. Mud is another surface to avoid, as the lightweight build of the Bikes means that they cannot find grip in the deep mud. Other obstacles, such as rocks and boulders, may also cause you to lose control or crash.

If you come close to another Bike or ATV, it is possible to punch the other rider off of their vehicle by pressing the R1 button if your opponent is on your right, and L1 button if on your left. It is also possible to do a bunny-hop (down then up on the D-Pad) to jump over obstacles such as barrels. Also, the rider can duck (down twice on the D-Pad) if riding through places with low clearance.

The ability to bunny-hop was removed in Apocalypse, most likely due to the possibility of players abusing it to air-cool their boost. It is also not possible to perform these actions in MotorStorm: Arctic Edge, and neither can you shift the rider's weight to perform wheelies and endos/stoppies. 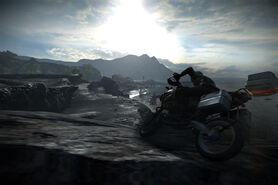 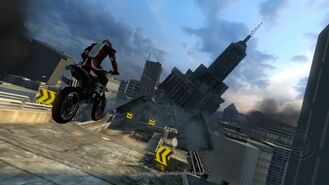 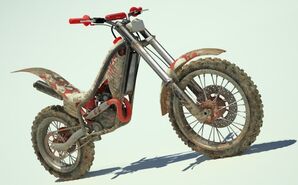 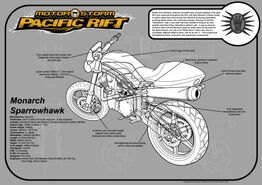