This track has it all – beautiful forest, vibrant fauna, and a picturesque mountain stream that courses through a narrow gorge, over brook and water-meadow, and plummets over an enormous waterfall. Let’s face it; if you’re only going to accidentally plummet over one giant precipice in your MotorStorm career, this is the one to do it on. Today is a good day to fly.

The rivers upstream of the waterfalls provide more impressive - and more dangerous - backdrops for races. Along the riverbanks, soaked rocks double as ramps to cross the flow while spray from the rapids obscures sightlines when they're needed most. All this against a terrifying drop to the jungle below.

Colossus Canyon is a Water-Zone track in MotorStorm: Pacific Rift, mostly water and rock with the odd bit of mud. This track is ideal for all vehicle types, as it has sections designated for light classes as well as large classes. 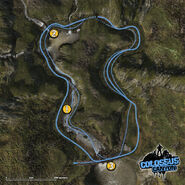 A bunch of wrecked vehicles in the tower shortcut