There were various times at which new liveries were available for download in Monument Valley. These including the Halloween scheme for the Castro Robusto, Holiday theme for the Castro Varadero, Chinese New Year Wulff Revo, and the Team liveries such as Big Eye Bunny, Quickfoot, Crazy Samurai and Numskull packs for all vehicles. There are also new liveries unlocked through the DLC packages that were previously AI exclusive. For example the metallic red & black livery for the Italia Vulcan and the Mute Bear livery for the Nord Viking are both unlocked through the Devil's Weekend DLC. 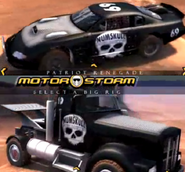 Manufacturer-themed signature packs were made available for various vehicle manufacturers, mainly those with large vehicle lineups. There are eight in total; Wombat, Jester, Lunar-Tec, Patriot, Monarch, Mohawk, Voodoo, and Atlas.

The first DLC livery pack was The Launch Livery, which was supposed to be available for a 2 week period (but is still available for download in the US Store only), commemorating the launch of MotorStorm: Apocalypse in certain countries. Included is a sticker listed under Artwork depicting a strobe party on the deck of The Carrier. The pack was released in conjunction with the Supercar Elite pack.

Themed after the new Prison Island Track released in the Afterparty patch, the livery consists of a stripe vinyl and the Logo of the Rock, as well as "City Correctional Facility" stickers.

A new livery released some time in Summer in Europe. It has yet to be made available in other areas. It has the number '69 on the side, probably referencing the Bryan Adams song "Summer of '69".

Added on October 31st, 2011. Consists of a livery and Jack-O-Lantern Artwork.

Added some time in December, with a scheduled removal date of January 2nd. Consists of a mountain livery with 'evil' snowman artwork.

Contains a fireworks-themed artwork and vinyl. Available until January 9th.