The Italia Gagliano is a Rally Car that is featured in MotorStorm and MotorStorm: Pacific Rift. Unlike others of its class, the Gagliano is well-suited to rough terrain.

The Italia Gagliano is based on the 1992 Lancia Delta HF Integrale rally car, but depicted as a three-door, rather than a five-door.

The army Gagliano that appears on The Grizzly. 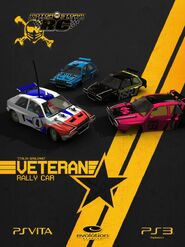 The "Veteran" Gagliano in MotorStorm RC.

A Lancia Delta Rally Car. Notice how the Martini stripes are similar to the RSR stripes on the Gagliano.

72 livery as it appears in the game, used by AI (named Kyra Embley).

AI-only #18 livery in MSMV (Magenta Buttercup). Note: this opponent appears only in the Revenge Weekend DLC.

Desert Scorpion livery as it appears in MSPR, once again unused.