In this ageless valley, a new breed of warrior has been born. Born to rage against the silence of these ancient rocks. Born to tear apart the very fabric of the desert. Born to win; at any cost. The stage is set. A storm is coming. The land braces itself... Welcome to MotorStorm!
- Intro movie, MotorStorm

MotorStorm (also known as MotorStorm: Monument Valley) is a racing video game developed by Evolution Studios and published by Sony Computer Entertainment for the PlayStation 3. First announced at E3 2005, the game was released in Japan in December 2006 and the rest of the World in March 2007. After their purchase of Evolution Studios, Sony stated that the studio was working on a sequel to MotorStorm. As of January 2012, the online servers have been shut down permanently, however the Time Attack servers and download of the game updates (required for DLC compatibility) remain active.

The events of the game take place at the fictional MotorStorm Festival in Monument Valley. The objective of the game is to win a series of off-road races and to be the overall winner of the Festival. Players are in control of seven different types of vehicles throughout the game: Rally Cars, Big Rigs, Bikes, ATVs, Racing Trucks, Buggies and Mud Pluggers. Each race requires the player to choose a particular vehicle type and often race against many of the other vehicles. Every track has many different routes, each catering to a specific class of vehicle thereby making the racing field more even. The events in the game occur in real-time, such as the mud effects, tire marks, and crashes (for example, if a car loses a bumper, it will remain where it lands for the duration of the race).

Each track is filled with a variety of jumps, bumps, cliffs, ledges, mud pits, and other obstacles. Races are generally three-lap events with two to fifteen racers.

Boost plays a large part in MotorStorm and is used to either catch up to opponents or pull away from them. Players must keep an eye on their boost gauge however, as deploying boost will dangerously heat the vehicle's engine; the longer the boost is held, the hotter the engine becomes. If the boost is held when the engine reaches its critical temperature, it will explode. Since explosions resulting from the boost typically rocket the player's vehicle forward, they can be used to edge out another racer across the finish line. This can be very useful when behind, although this does not work all of the time if the AI opponent gains the upper hand.

In online play, catch-up mode can be enabled. This means the leader of a race has less boost than everyone else, allowing players further back in the field to "catch-up". If the leader changes, so does the racer with less boost. This makes using boost for the leader a technical task, in theory they should only use it when necessary, and relying on their individual driving skills to win them the race.

Early details released by Sony and Evolution Studios show extremely high-quality rendered video sequences. Many gaming enthusiasts and members of the press became sceptical as to the source of the material shown, with most people suspecting the footage to be pre-rendered as opposed to real-time in-game footage.

In March 2006, shortly following the Game Developers Conference, leaked footage of a tech demo was spread across the internet on sites such as YouTube. The demo shows a yellow buggy (featured in the E3 video, and known as the Wombat Typhoon) and a motorbike both cutting through mud, as well as splashing the mud onto a white truck, and then shows violent crashes, such as a bike landing on a purple rally car, causing it to spin out, and a white Hummer-like mud plugger (the Atlas Jackhammer) ramming through the yellow Typhoon, causing it to get crushed by rolling over and crossing through flames and crashing into the guardrail, seemingly wrecked. Being a technical demo, it didn't show any gameplay aspects, or whether the final game would reach the standard of the E3 ’05 video. However, Sony representative Phil Harrison mentioned it would make an appearance at E3 ’06.

The game appeared at E3 ’06, although it missed the first day of the expo due to the show version's being completed and uploaded to LA just that day. The build at the show was only 50% complete but still showed some effects such as motion blur and terrain deformation.

MotorStorm was officially released in Japan on December 14, 2006, where it became the best-selling PlayStation 3 game; in North America on March 6, 2007; and in Europe as part of the European PlayStation 3 launch on March 23, 2007. Both the North American and European versions include online play, which was not included in the Japanese version at the time of its release. Online play for Japan was released in an update on June 20, 2007.

Although not directly a cheat, the so-called "Big Head" mode is a secret unlockable feature in which the player can comically increase the size of the heads of Bike/ATV riding characters. To activate this feature, the player must pause the game and hold down the L1, L2, L3, R1, R2, and R3 buttons, while pushing L3 left and R3 right. 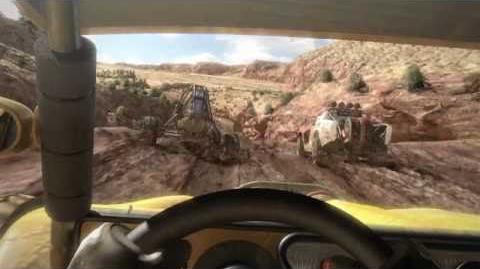 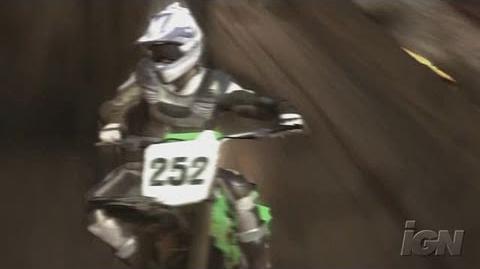 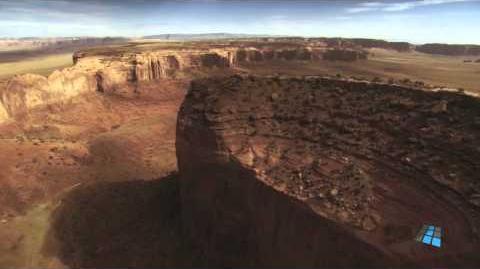 Brutal off-road racing was only the beginning for MotorStorm. Speed freaks, petrol heads, ravers and oddballs all came together under one banner to live fast or die trying. They chose a helmet for their logo, but these lunatics play anything but safe.

"I need MotorStorm. Came a time nothing less'd even wake me up." - Big Dog

Against the ageless Monument Valley came a new kind of warrior, raging against the silence of its ancient rocks, born to win at any cost. MotorStorm came to stand for everything these racers believed. Rockslides, mud pits, dust storms and 200ft drops separated the men from the boys.

"Right at the start there was Monument Valley, and when I die it'll be my Valhalla." - Big Dog