An island... born from fire, shaped by the elements, claimed by nature. And abandoned by man. Until now! The stage is set. The land braces itself. Welcome to MotorStorm!

MotorStorm: Pacific Rift is the sequel to the original MotorStorm. It was developed by Evolution Studios and published by Sony Computer Entertainment. It was released exclusively for the PlayStation 3 in 2008, on October 28th in the US, November 7th in the EU and November 20th in Japan.

On the 1st October 2012, the online servers were shut down indefinitely, rendering online play and certain vehicle/trophy unlocks impossible.

With 99 vehicles - 107 with DLC installed - Pacific Rift currently holds the title for the most vehicles within a single MotorStorm game.

A cast of wild individuals who dare to tame the fury of the Island. Recognize and contribute to the names and vehicles of these drivers in the following article.

There are tickets available whenever a new Festival Rank is unlocked, and there are 8 ranks. There are 3 types of events in the Festival: Race, Speed and Eliminator.

The races are 2 or 3 (1-10 in Wreckreation) laps around the 16 tracks, your opponents tend to range in vehicle class, and you may only pick the specific classes restricted to that race.

Speed tickets are when you must drive through checkpoints as fast as you can before the time limit runs out. Again you will only be able to use a specific vehicle for that race.

You must race to be the first, otherwise it's game over. You have 15 seconds to increase your position, if not you will be eliminated; every 15 seconds the vehicle in the last place will explode by self. In Wreckreation, the time limit ranges from 5-60 seconds, increments are of 5 seconds.

The Speed Weekend is a set of downloadable events available for Pacific Rift, featured in the Speed Expansion Pack. It solely features Speed events; these have you racing against the clock through a series of checkpoints before time runs out. However, once beaten, players must race again on the same track to beat their old, "qualifying" time. This time the track is lined with red and green barrels (green hurdles and red speed bumps for Bikes/ATVs to clear) which grant or remove five seconds from the player's time.

The Weekend is split into eight sections, one for each vehicle class. Completing a class Weekend unlocks a special vinyl for ONE of the vehicles within that class. Completing all events unlocks the Castro Monstruo in three liveries and a new driver

*Note that for reward purposes, events must only be "qualified" on.

Like its predecessor, Pacific Rift does allow for the management of the in-game soundtrack, allowing the player to enable and disable any of the featured songs.

Unlike its predecessor, Pacific Rift allows the option of adding a custom soundtrack via XMB. By a technical stance it is not by definition, a custom soundtrack feature, but rather a way for players to replace the game's soundtrack with any custom playlist created on their PS3 system. This feature can be accessed by pressing the PS button in the game's offline mode and selecting a song from a created playlist. This plays through the chosen playlist in the background as the player plays the game, overriding the game's internal soundtrack without effecting the in-game sound effects.

Pacific Rift featured 12-player online mulitplayer and 4-player split-screen offline multiplayer. On 1st October 2012, the online servers were shut off indefinitely. Henceforth, various trophies and vehicle unlocks (such as the Ozutsu Ronin) are now unachievable. When the servers were still active, the gameplay was split into three categories:

Ranked online play was the primary server for gamers to increase their online rank through a series of races consisting of 2-12 random players on a randomly selected track featuring randomly selected number of vehicle classes and laps. Once the lobby was full or the timer ran out a countdown began where players could veto the currently selected track and vehicle class choices. Once the veto was complete, players would have a limited time to select their class (unable to change the vehicle for that class or change their class once selected).

Once the race began, players raced 1-10 laps in an attempt to win the gold. Once the race was complete, points were either added or deducted to a player's rank depending on their finishing position. The players then left the lobby and were to repeat the cycle once more.

Each rank consisted of a bronze, silver, and gold meter which all had to be filled in order to reach the next rank.

Similar to ranked, casual featured the same basic layout, minus the ability to gain or loose points for ones rank. Fewer players used the casual online servers, making it more difficult for those looking to obtain the Wombat Beachmaster.

As the name states, custom allowed players to create their own custom races and invite players to join them online. This was the more laid back division of the online servers where individuals would race head to head with their freinds without the pressure of loosing ranked points.

In this gameplay mode, hosting players could manage the number of featured laps, availible vehicle classes, track, and time of day. They could also send invites to freinds to join freindly games in this gameplay division. Once two or more players are present within the lobby, the host may choose to start the match. If additional players join while a game is in session, they must wait in the lobby until the event has finished and the racing players return to the lobby.

A once dormant volcano blows its top and sets the scene for another thrilling festival of speed, chaos and danger. Racing from postcard beaches through the lava's edge to the peaks of mountains, these races take the 'Stormers to a paradise lost. 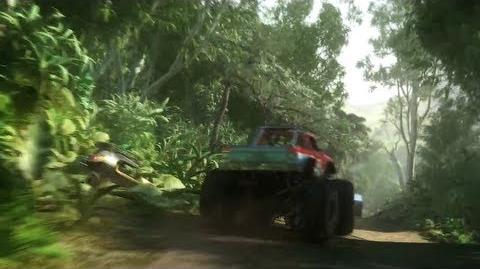 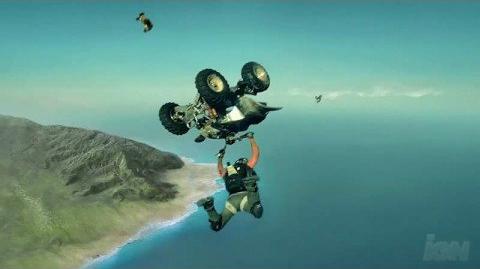 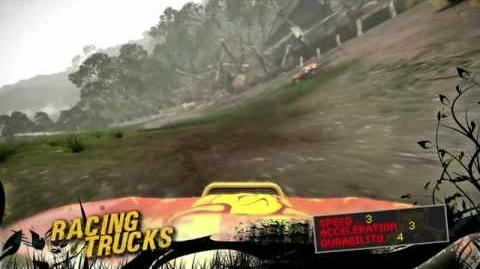