Only MotorStormers would think to stage a race in and around an old sugar plantation. The sharp machinery and rusty metal, those rust-weakened floors and rotten walls, and the zero-visibility of the cane fields all combine to make this track a sickly-sweet rush that’s going to ruin more than just your teeth.

Back in the day, the Island had a thriving sugar plantation. Business all dried up and it wasn't long before nature reclaimed the refinery. Low beams, pipes and rickety rooftops are the order of the day here as the race goes into some tight spots.

"Finally! Sugar! Where are those Mojitos?" - Dice

Sugar Rush is an Earth-Zone track in MotorStorm: Pacific Rift, based in an abandoned sugar plantation; it is chock-full of sharp turns, tight spaces, and low visibility. The enclosed nature of this track makes you more vunerable to attacks and nudges from other vehicles.

Sugar Rush's surface is mainly made up of dirt tracks with almost no mud, so it is great for most vehicles. There are also no natural opportunities for boost cooling, apart from the elevated irrigation system in the plantation itself. 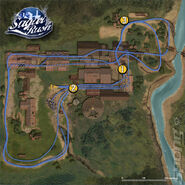 The explosives.
Add a photo to this gallery
Retrieved from "https://motorstorm.fandom.com/wiki/Sugar_Rush?oldid=33151"
Community content is available under CC-BY-SA unless otherwise noted.