There’s at least half a track here that isn’t ridiculously dangerous. The other half is on a camber so extreme that descriptions like ‘gnarly’, ‘radical’ and ‘utterly ridiculous’ don’t begin to convey it. This is all about keeping traction, and keeping nerve. Seasoned MotorStormers are already declaring ‘Don’t lose your bottle on the Edge – because if you do it’ll probably fall and kill someone half a mile below you”. Wise words indeed.

When exploring, the festival organisers found space for a race on the outcroppings on the very sheer north side of the Island. Racers had to drive at full speed so their momentum carried them all the way around with falling into the ocean.

"There's a dozen shipwrecks and as many dune buggies dashed against those rocks." - Big Dog

The Edge is an Air-zone track in MotorStorm: Pacific Rift. As its name implies, it takes place on the literal edge of a very steep cliff. There are times when your vehicle will loose grip on the slanted section of the track, near the cliff edge, and you'll fall into the Pacific Ocean. This track is mainly rocky and smooth, perfect for all vehicle classes.

3 key points any MotorStormer will remember about The Edge; it's extremely fast, it's extremely narrow, and it's extremely vertiginous. Another key fact to remember is that when Lava bombs impact the track from one of the many nearby volcanoes, it ain't going to make the racing any easier. The challenge just got turned up to 11.

This track is also available in Volcanic version, but is only playable if you purchase the Adrenaline Expansion DLC. 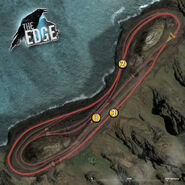 Map of The Edge

Base of 1st Jump

This track is also available in Volcanic version when the Adrenaline Expansion DLC is purchased from the PlayStation Store. Like Mudslide, the track is filled with lava bombs that are present throughout the track, which can pose an extreme threat for drivers unlucky enough to crash into them.