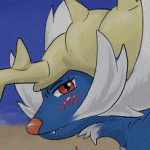 I have officially resigned from management of this Wiki. Direct questions to Chuck1551 or Sammy.

Hello fellow 'stormers! I have Apocalypse, Pacific Rift, MotorStorm, and MSRC. My PSN is Joby91467 if you wanna race sometime. See you on the other side.

"To make it this far means you're an incredible driver, prove it once more."

Way back when, I was planning on getting to my first MotorStorm after reading about it in the news. At that time I was driving a rickety Italia Gagliano that had no windsheilds and a hood that had been burnt black by numerous accidents involving gasoline and interal combustion engines. I had a Mohawk Indiana and figured I might as well take it too, so I tore the back seats, the rear hatch, and the last foot of the roof off to make room for it. I set on what would be my first MotorStorm in the deserts of Monument Valley.

On the way to the Festival I encountered numerous other MotorStorm aficionados, all of whom had something or another strapped to the roof of their vehicle. I picked up one person who went by the name of "Grand-Pappy", his car had stalled on the middle of the road (and apparently had it hit by a Castro Varadero also). I saw cars of all shapes and sizes, ranging from hulking masses of steel on tractor tires to tiny MotoCross bikes weighed down with supplies.

Once I actually arrived at the Festival I got directed to park next to this shiny, almost spotless, Patriot Surger (a car I had heard about in the news more times than I could count). The man driving said Surger went by the name of Killercrusher, someone who I would see a million times while racing. I participated in a couple of races, but my Gagliano didn't last very long. In fact it practically blew up after a punishing race on RainGod Mesa. My Indiana on the other hand stood the test of time and punishment, while it constantly needed to be cleaned because of the buildup of dust and debri.

Racing on the island went pretty much the same way as Monument Valley did, although in between festivals I got my hands on a Castro Toro with a Japanese livery and a beaten up Atlas Varjack with no floor panels.

On the way to the City the Carrier hit some rough waves which caused my Toro and Varjack to go flying over the edge. I once again was stuck with my trusty old Indiana, although once I arrived I won a Falfer Undertaker for being the person who jumped from the carrier onto the pavement over the largest distance. At the city I got various other cars by finding their wrecks scattered on the tracks and fixing them up.

Once I got to the city I resumed racing as normal, although the city didn't exactly appeal to me. Luckly I wasn't alone and joined the Outlanders group. I made name for myself among the racers, although I never got first place, only second and third. Of course I made up for my sketchy racing by becoming one of the best known stunt drivers, finding a new ramp to launch off of every race. I spent more time in the air than I did.

on the ground, a good strategy if you don't want to under the wheels of a Monster Truck!

Bolded games are ones I play online as well as offline.

I have a few more games but I never play them or the community of it has died.

*Click on an image to be taken to it's article. Some of these are out of date. Download them here. My personal livery consists of an orange-white wave with Free Style Decals as my primary sponsor (see the Mirage 401 image for an example.)

Monarch Vestige-R
Add a photo to this gallery

(In order of most used to least used.)

1. Dirt Bikes - Sure it's weak, but that's not a problem if you're thirty seconds ahead of everyone!

2. Racing Trucks - When in doubt, all-rounded is the way to go.

3. Buggies - Like the Racing Truck, but faster at the price of strength.

4. Rally Car - Once you master it, it's hard to beat. It's just mastering it that's the problem.

6. Mud Pluggers - Has the power to endure damage, and can just as easily dish it out.

9. Chopper - Fast...in a straight line...,but has a horrid turning radius. 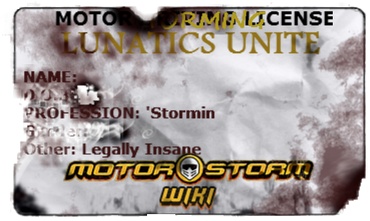 Retrieved from "https://motorstorm.fandom.com/wiki/User:Dunewolfz?oldid=28590"
Community content is available under CC-BY-SA unless otherwise noted.