The Wombat Typhoon is a Buggy seen throughout, and even outside of, the MotorStorm franchise. This buggy seems to be among some of the most easily recognized vehicles in the series, having appeared in every installment, as well as being on the cover of every game and the original 2005 E3 trailer. This buggy is also one of the most popular and iconic vehicles in the series. It was first available in the original MotorStorm, is unlockable in Pacific Rift, and appears yet again in Apocalypse, as the first available Buggy. It is also available in the games for handheld consoles - Arctic Edge and RC.

The Typhoon is one of the default Buggies in MotorStorm, alongside the Beelzebuggy Carabid.

The Typhoon is obtained by achieving the "Hire Me" Trophy, requiring the player to beat every ghost in Time Attack.

In Arctic Edge, the Typhoon is the reward vehicle for placing 1st in the "Spring Loaded" Invitational event, in Rank 6 of the Festival. This also makes it the final vehicle unlocked through gameplay.

The Typhoon is the default Buggy in Apocalypse; the player may complete two Level 3 Part Challenges with it to unlock the Voodoo Sandcutter.

The Wombat Typhoon's body shell is based on a Meyers Manx Buggy, with a side and frontal profile that, not counting the front headlights on the real machine, are matched almost 1:1. The Typhoon's suspension is, however, significantly modified, lifted and fitted with chunkier tires suited to the rough nature of MotorStorm racing. The light pod at the front is identical to a few of the SCORE Class 10 buggies competing in the Baja 1000, specifically one driven by the Hutchins family.

The Typhoon was added to the game in full as a free downloadable content vehicle on April 1st (April Fools' Day).[2] Unlike the other vehicles in the game, the Typhoon is not subject to penalties for corner cutting, off-road driving, or contact, and it even has a boost feature.[3] 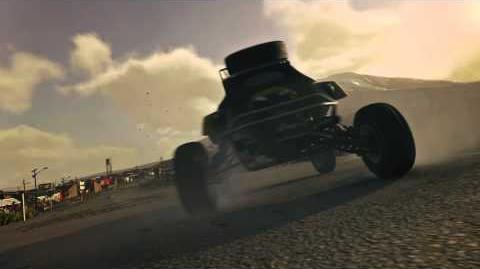 The standard Typhoon in Apocalypse.

A SCORE Class 10 Baja Buggy. Notice that the light pod at the front is identical to the Wombat Typhoon.

A Meyers Manx Buggy, from which the Wombat Typhoon takes its side profile.